URGENT CALL FOR ACTION: The Occupation and the People’s Library are being destroyed right now by the NYPD. The Library and all the tents and equipment from the camp are being thrown in dumpsters.

Ask that the Mayor and NYPD stop the eviction of Occupy Wall Street.

I’m currently watching video from the CBS News helicopter which shows that the NYPD have surrounded the occupation at Liberty Plaza with two layers of barricades and lines of police. They have also set up lights shining into the park from all sides. Streams of police are visible entering the park. 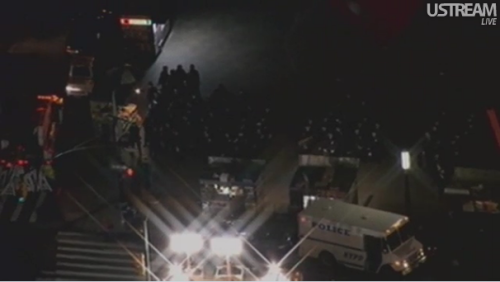 Library staff have confirmed that police are entering the occupation. The global revolution livestream is reporting that the park is being “raided” now.

It appears that at this moment, the NYPD are moving to evict the occupation. CBS reports that the press is not being allowed into the park to cover the events. There are massive numbers of police lined up in battallions on the north side of the park. Also, no one is being allowed near the park.

The police are making every effort to prevent media and OWS cameras from filming what is occurring in the park right now. The best way you can help right now is to flood the city with calls and spread the word.