Running Out Of Time: Help Print The Occupy Wall Street Poetry Anthology: And it’s been updated!!! 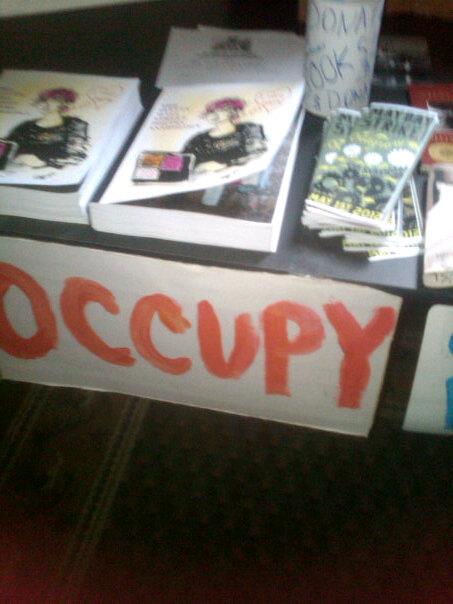 In synchronicity with Poetry Month, which runs throughout April, a small and very committed group of people have been hard at work preparing the anthology for print. In addition to editing, reformatting, and composing a table of contents for the considerable volume of verse contained therein, we have also been working to raise the necessary funding to make this printing possible. You can check out the indiegogo campaign here. The Occupy Wall Street Poetry Anthology consists of 721 poems by 448 poets, as well as 4 introductory texts. The poems are in English, French, Spanish, Italian, Russian, Urdu, German, Japanese, Chinese and Dutch. The online PDF file has officially been updated to include recent additional poems, a Table of Contents and a new section at the end “Suggestion Box.” The backgrounds, career paths, political affiliations, gender identities, opinions, and stylistic choices of the authors are as varied as the occupy movement itself. In bypassing the curatorial and marketing concerns which are de rigeur of a publishing company, we have attempted to create a fully inclusive document; a record of our collective voice which stands in solidarity with not only its authors but as a testament to the literal space held by the general public surrounding the time of its creation. 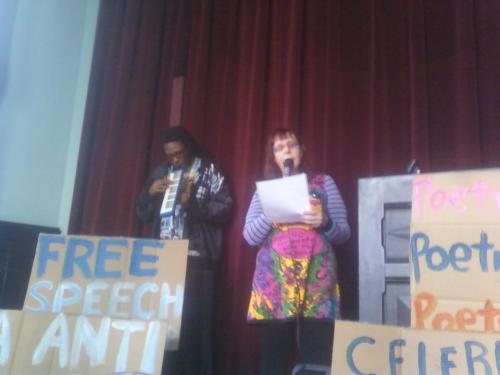 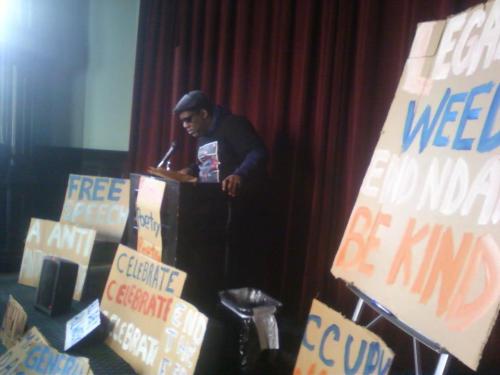 On April 14th, we gave two copies of a preliminary printing to the Jefferson Market branch of the New York Public Library on the occasion of a reading celebrating the anthology and discussing the importance of the upcoming Mayday strike. The library is currently hosting an installation of poems from the anthology, on display until the end of April. It is an honor and a great achievement to have the NYPL support and recognize the Occupy Wall Street Poetry Anthology; by creating space on its shelves for this book, the NYPL is ensuring that future readers will be able to access this crucial moment in history from the perspectives of those who lived it. 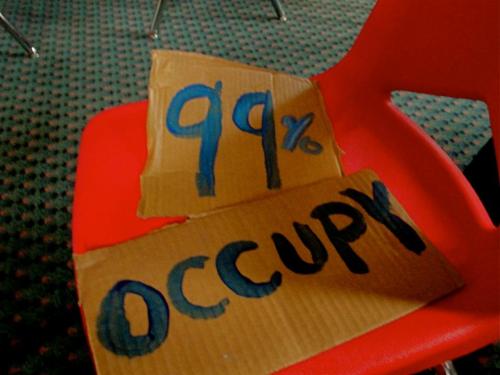 To print this text in its entirety is a special opportunity. Not only does the anthology consist of poems from all over the world, it also has drawings, paintings, and other ephemera from Zuccotti Park. It is simultaneously a beacon for free speech and a time capsule for future generations, so they may examine the hearts and minds that comprised and supported the Occupy Movement in its early stages. All submissions were accepted, so there are also entries that are critical of the Occupy Movement as well as poems in dialogue with subject matter contingent to the direct act of protest/occupation. After speaking with several publishers whose demands to print a consolidated version of the book [highlighting mostly its more noted contributors] were clearly not in keeping with the inclusive tone of the Occupy movement, the decision to self-publish became imperative. The document, in its entirety, is already print-ready. The ultimate goal of this edition is to ensure that the anthology remains in circulation by distributing copies to major libraries and literary institutions on an international level, as well as providing copies to each contributor and enabling us to give the book, free of charge, to as many people as possible. 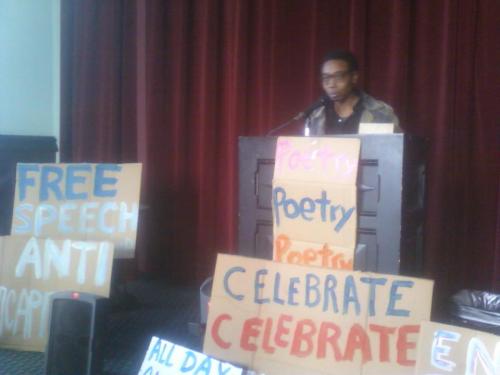 By supporting the campaign to fund the printing of the anthology, you are ensuring copies get to occupations, library systems and special collections around the world. By the end of May, it is entirely possible for every occupation to have a few copies of the anthology to show passersby that don’t necessarily understand the gravity and global scope of the movement, or how such a movement could be made up of no demands. Also–if enough money is raised, individuals, as well as libraries and special collections, will be able to own a copy. Those that donate $50 or more will be able to not only support the printing of copies that will go to the public domain, but will also receive their own copy. You can check out the indiegogo campaign here.

And a photo Eliot Katz sent me, to share with everyone::